Dr. Landsberg was also the Irving S. Cutter Professor of Medicine, Dean Emeritus, and director of the Northwestern Comprehensive Center on Obesity. The author of over 230 publications, he has an international reputation in the fields of the sympathetic nervous system, the regulation of metabolism, hypertension and obesity. He also wrote two books: “1000 Internal Medicine Pearls” and “Catecholamines,” summarizing his clinical experience and some of his fundamental research. Furthermore, he served as co-editor on the remarkable compendium of recollections on the unique leadership of his most important mentor and one fo the 20th century giants of Internal Medicine, Professor Paul B. Beeson, MD. He is a member of numerous distinguished professional societies and has received many awards and honors, including the Franz Volhard Award from the International Society of Hypertension, election to Fellowship of the American Association for the Advancement of Science and appointment as Master of the American College of Physicians.

Dr. Landsberg officially retired on October 15, 2020 from his position as the Irving S. Cutter Professor of Medicine, Dean Emeritus. He continues to remain active with the Landsberg Society. 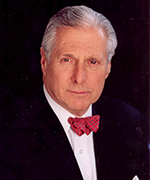 Become a member of the Landsberg Society and keep abreast of upcoming events.